Mostly cloudy throughout the day.

AN OVERVIEW OF TECHNIQUES 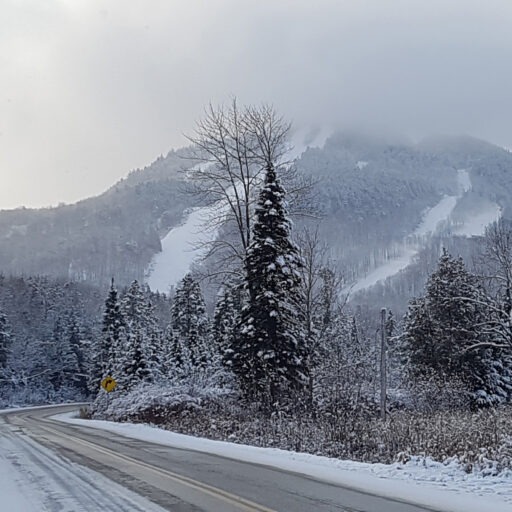 Even with a snowmaking system, we need a helping hand from Mother Nature. She must first bring us a cold temperature and then a low humidity rate to guarantee us ideal snow production conditions. It is also possible to produce in marginal snow conditions, but these conditions are much less optimal. It’s longer. 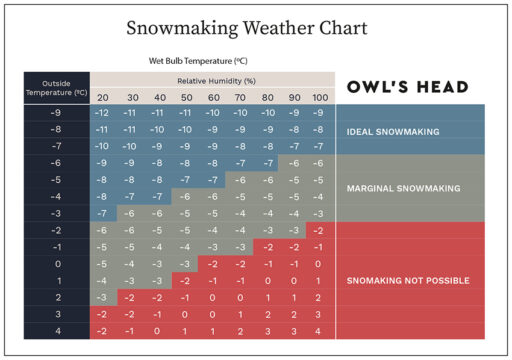 There are 3 important elements to snowmaking:

Very low humidity positively affects the temperature down. It is for this reason that in the American West, for example in Utah, it is possible to produce snow at 0 degrees since the humidity rate varies from 15% to 20% which gives a cumulative of -5 degrees. In Quebec, we generally produce snow with an average humidity rate of 70% to 75%. For example, during the 2020-2021 season, the mild temperature at the beginning of the season only offered marginal conditions, if not impossible.

All manufacturing systems can produce at marginal temperatures, but it is the factor of air temperature and humidity that positively or negatively affects production. Here at Owl’s Head, there is also the temperature of the water in Lake Memphremagog that affects us. Between early November and mid-December, the water is generally at 8 degrees, which is not conducive to the transformation of water into snow when it comes out of the cannon in marginal temperatures. The water generally stabilizes at 4 degrees around mid-December, which favours processing, but always under marginal conditions.

If we have a temperature of -4 degrees at 75% humidity, this gives us a cumulative of -5 degrees in the marginal snow category. We will turn about 50% of the water out of the cannon into snow. Over 12 hours, a cannon will generate a mound of snow about 3 to 4 feet around it.

If we have a temperature of -8 degrees with a humidity rate of 60% generally on a clear day, this gives us a cumulative of -9 degrees which is in the ideal snow category. We will turn about 70% to 80% of the water out of the cannon into snow. Over 12 hours, a cannon will generate a mound of snow about 10 to 12 feet around it.

There are several other technical points to snowmaking, but these are the main ones that tell us the manufacturing parameters. It is for this reason that some days at -4 degrees with 95% humidity, it is not worth leaving the system especially if the cold window is only a few hours. It takes 3 hours to start the snowmaking system and 3 hours to shut it down. When the cold windows are less than 12 hours in marginal temperatures there is no benefit to starting the system, production will be almost zero.

Usually, in November and December, the number of manufacturing hours is around 60% of our production for the season, the rest is usually done in January. But there is always the weather factor that can change the situation, let’s take the year 2020-2021 as a reference: on December 31, 2020, we had 35% snowfall with two significant warm periods that affected all the ski resorts. skiing and no accumulation of natural snow on the ground.

Vaccination passport mandatory for the 2021-2022 season